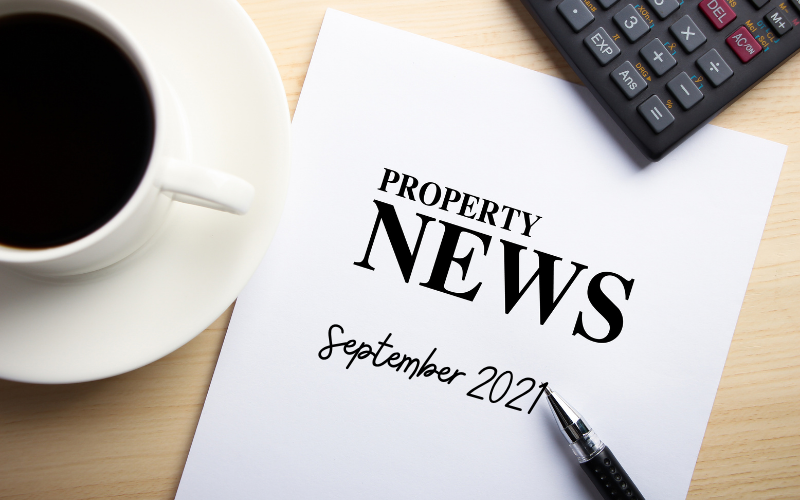 The UK property market appears to be stabilising after a frantic 15 months, and the stamp duty holiday is finally coming to an end this month.

Read on to find out more, with some of September’s key headlines:

The tax holiday on stamp duty will finally draw to a close at the end of September in England and Northern Ireland after 15 months.

The scheme was introduced by Chancellor Rishi Sunak in July 2020 to stimulate the housing market following the first national lockdown and is widely considered to have been a great success.

House prices have rocketed, and demand has soared thanks to the tax break, which meant savings of up to £15,000 for buyers.

Initially, the holiday allowed buyers to avoid stamp duty on properties up to £500,000. This was then lowered to £250,000 earlier this year, and from 1st October it will be axed completely, with stamp duty payable on all properties over £125,000 as the UK economy continues to bounce back post-pandemic.

Rents Outside London Rising At Fastest Rate For 13 Years

Leading property website Zoopla has reported a significant rise in rental prices across the UK, with prices increasing at their highest rate since 2008.

Their data indicates that rental prices have risen by 5% on average in the 12 months to the end of July, meaning renters are forking out an extra £456 a year on average.

The trend doesn’t apply to London though, with average rental prices in the capital actually falling 3.8% as renters moved away from the city during the peak of the pandemic.

The UK government has announced a new funding package to help thousands of people get on to the property ladder.

The scheme has been confirmed in response to the growing trend of demand outstripping supply, which has pushed prices up to unaffordable levels for many would-be buyers, as the government looks to redress the balance.

A study by leading property website Rightmove has revealed the top five property hotspots for sellers.

With demand for homes far outweighing supply, some towns across the UK have become hotspots, with more buyers on the market than at any time in the past 10 years.

Newmarket in Suffolk tops the hotspot list. The market town that’s synonymous with horse racing has seen the number of homes available for sale drop by 49% in the past year, while the number of sales being agreed has gone up 79%. As a result, asking prices have seen a 9% increase since 2019, with average prices now sitting at £320,000.

It’s a similar story in the Hertfordshire town of Berkhamsted. The commuter town has seen a 57% drop in the number of properties for sale, with a 59% increase in properties sold. Similarly, prices have increased by 9% since 2019, with the average property now costing a shade over £694,000.

The rest of the top five is completed by Witney in Oxfordshire, High Wycombe in Buckinghamshire, and St Ives in Cambridgeshire.

Perhaps tellingly, all five hotspots are peaceful, countryside locations away from the city centres.

A report from national property portal Rightmove has revealed a huge increase in demand for rental properties that accept pets.

It’s estimated that over a third of UK households have become pet owners since the first lockdown in March 2020, as furloughed employees and those who are new to working from home picked up pets to keep them company while spending more time indoors.

As a result, demand for pet-friendly rental properties has increased by a whopping 120%, with ‘pet-friendly’ and ‘pets allowed’ being the top searches for renters.

And in a sign of the changing demands of renters, and especially those with four-legged friends to consider, the next two most popular searches are for balconies and gardens, where demand is up 70% and 39% respectively.

Property portal Zoopla has revealed the findings of a study that shows where buyers can get the most floor space for their money, and it makes for very interesting reading.

Unsurprisingly, London is the least budget-friendly, with homes costing £562 per square foot on average, in stark contrast to the North East, which is the cheapest region at £157 per square foot.

In terms of towns, Burnley is the best value place in the UK at £123 per square foot, however, perhaps the most surprising finding in the report is the cost in Kensington and Chelsea, West London. The average cost there is £1,491 per square foot, which means the floor space required for a double bed would set you back an astronomical £46,550!

For more property news and updates and a more detailed overview of the Torbay & Teignbridge area, get in touch with iMove Estate Agents. We are your local property experts. Call us on 01803 367191 / 01626 242349 or email info@imoveestateagents.co.uk.